Designers can create new components and dashboards within an Intuitive Dashboards installation to which they have relevant permissions. When a component or dashboard is initially created, it can be saved by the designer. Following that initial save, that entity remains private to the designer and cannot be viewed by other users on the system.

The designer can make their component or dashboard available to other users by publishing it. Publication involves selecting one or more groups within the group structure setup by the dashboard system administrator. 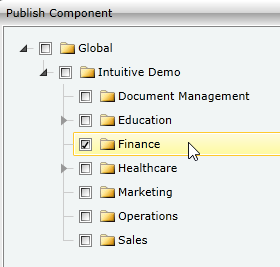 Additionally a designer can choose to allow their objects to be editable by other designers by ticking the 'allow other designers to edit this object' checkbox at the time of publication.

Permissions are inherited within the structure of groups setup by the administrator. In the example above, the published component would only be available to members of the 'Finance' group; however if it had been published into the 'Intuitive Demo' group then all users who were members of the groups that are children of that group (eg 'Education') would be able to use it. In this way the software allows a very granular security system to be created whilst retaining the ability for a designer to publish to a large number of users at the same time by selecting parent groups.

Have more questions? Submit a request